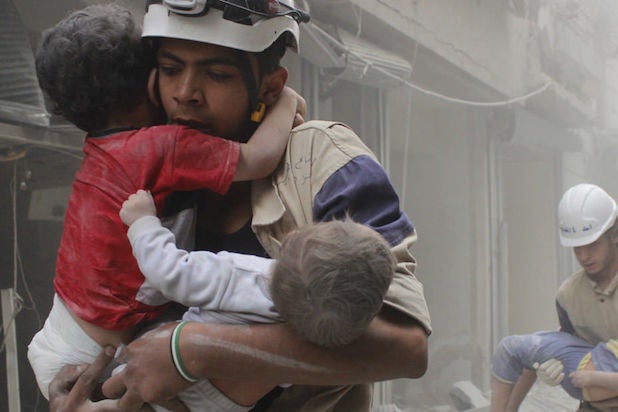 "Cried From Syria" (Courtesy of Sundance)

It’s not unusual for film-festival movies to have some overlap in theme and approach, but “City of Ghosts” and “Cries From Syria,” both of which premiered at the Sundance Film Festival, have an extra measure of synchronicity.

Both films were made by Oscar nominees who competed against each other just last year with visceral, immersive documentaries — Matthew Heineman with “Cartel Land” and Evgeny Afineevsky with “Winter on Fire: Ukraine’s Fight for Freedom.” And the new movies by Heineman and  Afineevsky are both set in today’s Syria, ravaged by ISIS, Russian bombs and the repressive Assad regime.

Heineman’s “City of Ghosts,” which will be released on Amazon Prime later this year, and Afineevsky “Cries From Syria,” which did the same a day later, aren’t even the only Syria-set docs at this year’s festival; “Last Men in Aleppo” premieres on Monday, and its subjects, the White Helmets or Syrian Defense League, are mentioned in both “City of Ghosts” and “Cries From Syria” (as well as the Oscar-shortlisted short doc “The White Helmets”).

Also Read: 'A Ghost Story' Sundance Review: How Can a Ghost in a Bedsheet Break Your Heart?

The films are all extremely timely, with “City of Ghosts” taking on added resonance as the Trump administration has devoted much of its first weekend to criticizing journalists. The film follows the members of Raqqa Is Being Slaughtered Silently (RBSS), journalists who have spent the last few years trying to document the repression and brutality in their home country.

Increasingly, they’ve had to do so from a distance — and even then, the act of reporting has put their lives in danger, with ISIS calling for the murder of reporters who are working from what they hoped would be the relative safety of Turkey or Germany.

Heineman, whose last film quite literally put him in the line of fire in Mexico’s drug wars, takes his cameras to the disparate locations from which the members of RBSS do their work. That work involves spreading the word about the horrors visited upon Syria by the corrupt Assad regime, by ISIS taking advantage of the chaos and by Russia sending in bombers, ostensibly to fight ISIS but in practice to kill thousands of civilians who might not support Assad.

We see some of the carnage —  but “City of Ghosts” is focused not on the news, but on the people who risk everything to spread it. That makes it a less immersive and immediate piece of filmmaking than “Cartel Land,” though no less valuable. Heineman finds a fascinating perspective on the unfolding tragedy, and finds heroes in an unexpected place (and, for many people these days, an unexpected profession).

Afineevsky’s “Cries From Syria” does not so much look for heroes as show the awful face of tragedy. A warning might be in order: The doc, which debuted on HBO in March, might well be the hardest film to sit through in the Sundance lineup — not because it’s bad, but because it is so overwhelmingly sad.

The film opens with a shot of the corpse of a young boy, lying face-down on a Mediterranean beach after drowning when a boatload of Syrian refugees sank. It’s a gut punch in the first minute of the movie, impossible to shake.

And “Cries From Syria” doesn’t get any easier, because the footage Afineevsky has gathered and shot pulls no punches when it comes to depicting the awful toll that the fighting has taken on Syria’s citizens, and especially its children.

Afineevsky’s “Winter on Fire,” which dealt with the citizen protests that toppled Ukraine’s president, has moments of real triumph (though a postscript about Putin’s plans for the country was sobering). In “Cries From Syria,” victories are small and triumph is nowhere to be found; as the title suggests, this is a howl of pain from a ravaged land.

Truthfully, I’m not sure that I would say you should see “Cries From Syria”; the experience is, at times, that excruciating. But I can tell you that if you do see it, you won’t forget it.

“Cries From Syria” debuted in March on HBO; “City of Ghosts” will premiere on Amazon Prime later this year.

Sundance 2017: Inside and backstage the best industry bashes at the Sundance Film Festival with The Party Report’s Mikey Glazer, presented by the Kia Niro.

Pink hats and post-march clothes dominated the sidewalk style scene on Saturday after a sea of activism filled Park City for the Women's March.

Here, the trio ducked in to the Hub at Park City Live, a sprawling hospitality lounge.