Merge Sort follows the rule of Divide and Conquer to sort a given set of numbers/elements, recursively, hence consuming less time.

In the last two tutorials, we learned about Selection Sort and Insertion Sort, both of which have a worst-case running time of O(n2). As the size of input grows, insertion and selection sort can take a long time to run.

Merge sort , on the other hand, runs in O(n*log n) time in all the cases.

Before jumping on to, how merge sort works and it's implementation, first lets understand what is the rule of Divide and Conquer?

When Britishers came to India, they saw a country with different religions living in harmony, hard working but naive citizens, unity in diversity, and found it difficult to establish their empire. So, they adopted the policy of Divide and Rule. Where the population of India was collectively a one big problem for them, they divided the problem into smaller problems, by instigating rivalries between local kings, making them stand against each other, and this worked very well for them.

Well that was history, and a socio-political policy (Divide and Rule), but the idea here is, if we can somehow divide a problem into smaller sub-problems, it becomes easier to eventually solve the whole problem.

In Merge Sort, the given unsorted array with n elements, is divided into n subarrays, each having one element, because a single element is always sorted in itself. Then, it repeatedly merges these subarrays, to produce new sorted subarrays, and in the end, one complete sorted array is produced.

The concept of Divide and Conquer involves three steps: 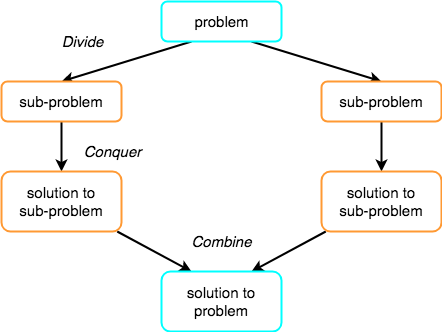 As we have already discussed that merge sort utilizes divide-and-conquer rule to break the problem into sub-problems, the problem in this case being, sorting a given array.

In merge sort, we break the given array midway, for example if the original array had 6 elements, then merge sort will break it down into two subarrays with 3 elements each.

But breaking the orignal array into 2 smaller subarrays is not helping us in sorting the array.

And then we have to merge all these sorted subarrays, step by step to form one single sorted array.

Below, we have a pictorial representation of how merge sort will sort the given array. 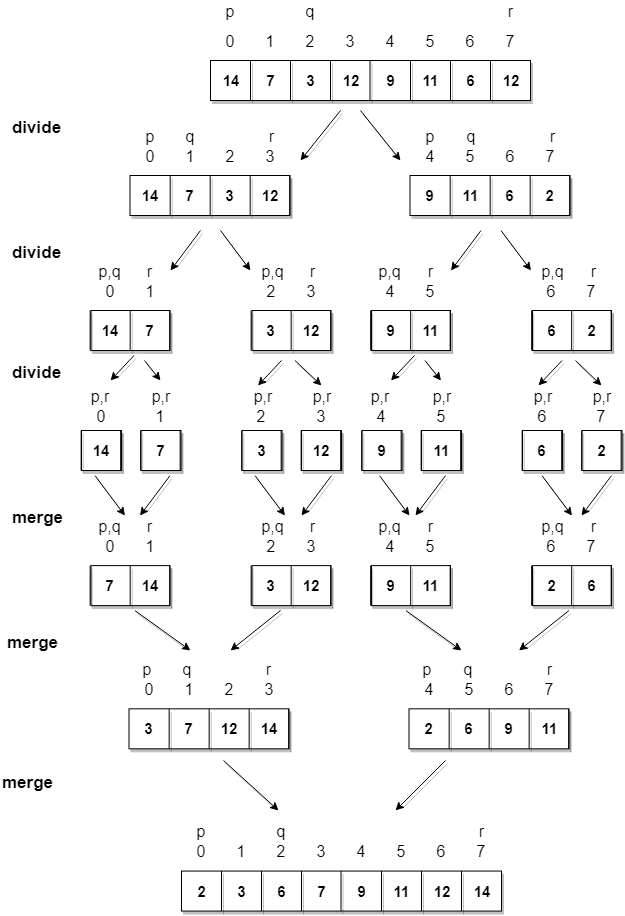 Below we have a C program implementing merge sort algorithm.

Merge Sort is quite fast, and has a time complexity of O(n*log n). It is also a stable sort, which means the "equal" elements are ordered in the same order in the sorted list.

In this section we will understand why the running time for merge sort is O(n*log n).

As we have already learned in Binary Search that whenever we divide a number into half in every step, it can be represented using a logarithmic function, which is log n and the number of steps can be represented by log n + 1(at most)

Also, we perform a single step operation to find out the middle of any subarray, i.e. O(1).

And to merge the subarrays, made by dividing the original array of n elements, a running time of O(n) will be required.

Hence the total time for mergeSort function will become n(log n + 1), which gives us a time complexity of O(n*log n).