By
Aoife White
,
Stephanie Bodoni
, and
Natalia Drozdiak
Updated on 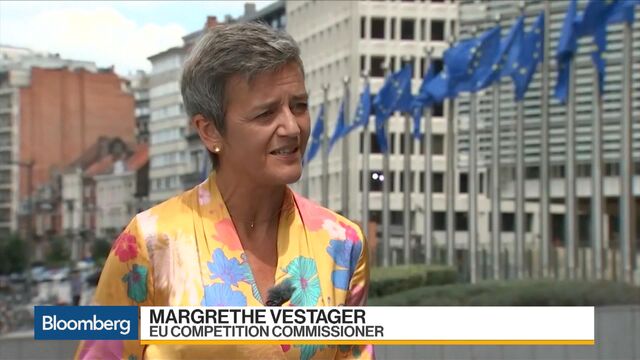 Google received a record 4.3 billion-euro ($5 billion) antitrust fine from the European Union and was ordered to change the way it puts search and web-browser apps onto Android mobile devices.

The penalty -- the same amount the Netherlands contributes to the EU budget every year -- is far higher than any other dished out by the U.S., Chinese or other antitrust authorities. More significantly, Google was given until mid-October to stop what the EU called "illegal practices" on contracts with handset manufacturers that push its services in front of users. It faces daily fines of 5 percent of revenue if it doesn’t obey.

Google owner Alphabet Inc. generated about the same amount of money as the penalty every 16 days in 2017, based on the company’s reported annual revenue of $110.9 billion.

"The fines are still relatively minuscule" for a company the size of Google, said Maurice Stucke, a law professor at the University of Tennessee and a former U.S. Justice Department attorney. "They also have to, within 90 days, stop the practice so that can have more teeth."

The search giant has built a massive business of banner and videos ads, thanks largely to its central role on Android devices. Google will account for a third of all global mobile ads in 2018, according to research firm eMarketer, giving the company around $40 billion in sales outside the U.S. Google risks losing that traction if it is forced to surrender its real estate on millions of Android phones.

“Google has used Android as a vehicle to cement the dominance of its search engine," EU Competition Commissioner Margrethe Vestager told reporters. “These practices have denied rivals the chance to innovate and compete on the merits."

Google immediately said it would challenge the ruling at the EU courts. An appeal wouldn’t change its need to comply with the EU order, unless it gets judges to allow "interim measures" that halt the commission findings.

In a statement posted online, Google Chief Executive Officer Sundar Pichai said the EU decision “rejects the business model that supports Android, which has created more choice for everyone, not less.” Users can easily disable or delete apps that are loaded on their phone and Google only earns revenue "if our apps are installed and if people choose to use our apps instead of the rival apps," he said.

Vestager said it was “solely” up to Google to determine how it can comply with the EU order. “The obvious minimum” is that the “contractual restrictions disappear,” she told Bloomberg TV in an interview. She wouldn’t be drawn on how Google could or should change the way it distributes apps and makes money from the Android software it gives away.

Google declined to say what changes it might make to comply with the EU order.

QuickTake: Why Google Is Again in the EU’s Antitrust Crosshairs

The EU’s decision would bring the running total of Google fines to about 6.7 billion euros. Last year, Google faced a then-record 2.4 billion-euro penalty following an investigation into shopping-search service. Wednesday’s fine could soon be followed by more from a probe into online advertising contracts.

The size of the fine reflects "very serious illegal behavior" going back to 2011 during a period when the company’s revenue was growing, Vestager said.

The EU said Google ensures that Google Search and Chrome are pre-installed on "practically all Android devices" sold in Europe. Users who find these apps on their phones are likely to stick with them and "do not download competing apps in numbers that can offset the significant commercial advantage derived on pre-installation.”

Google’s actions reduce the incentives for manufacturers to install and for users to seek out competing apps, it said.

The probe targeted contracts that require Android-phones makers to take Google’s search and browser apps and other Google services when they want to license the Play app store, which officials say is a "must-have" for new phones.

Mozilla Corp., which makes the Firefox web software, said it hoped the EU probe "will help level the playing field for mobile browser." DuckDuckGo Inc., a search engine that doesn’t track users, said Google’s actions have "led directly to us having less market share on Android."

The EU also found illegal Google’s "significant financial incentives" to telecoms operators and manufacturers that exclusively install Google search on devices. Rivals couldn’t compete with these payments, making it difficult for any other search engine to get their app pre-installed. The EU said Google stopped doing this in 2014.

Google has argued that such a ruling will harm app developers and customers by undercutting Google’s business model of giving away Android software and generating revenue from mobile advertising. That keeps smartphone prices low, it says.

Vestager said her decision wouldn’t prevent Google from making money from the Android operating system and recouping its investments.

Users face “switching costs" to move between Apple and Android and would continue to face Google Search as a default on Apple devices, the EU said.

— With assistance by Nikos Chrysoloras

(Updates with comment in fourth paragraph, adds companies’ reaction.)
Published on
Updated on
Have a confidential tip for our reporters?
GET IN TOUCH
Before it's here, it's on the Bloomberg Terminal.
LEARN MORE